The Difference Between Narcolepsy Type 1 and Type 2 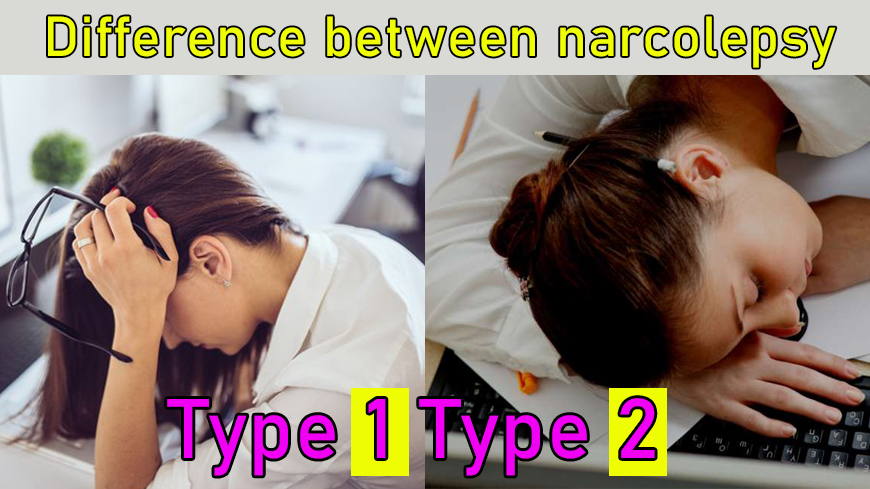 Narcolepsy is a lifelong neurological disorder that is associated with excessive sleepiness during the day. Even if a person is at a meeting with a big-time businessman, or a student is giving the most important presentation or his/her career, they involuntarily fall asleep with absolutely no control over their body or mind.

People who suffer from Narcolepsy are not capable of staying awake throughout the day, because at some point, either while sitting, eating, walking, or driving, their mind will shut down.

This inactivity in the brain leads to the body searching for signals from the brain which would otherwise be received in order to communicate wilful bodily movements. The frequency of this disease is low – about 1 in 2000 people are diagnosed with Narcolepsy.

Narcolepsy is known to occur in people whose brains have a lower tendency to maintain high levels of wake-promoting hormones such as dopamine, norepinephrine, and serotonin. There are two types of Narcolepsy which you can read about below.

What is Type 1 Narcolepsy?

This type of narcolepsy is accompanied by another bodily disorder and low levels of Hypocretin in the hypothalamus. Usually, narcolepsy involved excessive daytime sleepiness (EDS) at random times during the day. But type 1 narcolepsy occurs with:

What is Type 2 Narcolepsy?

Type 2 narcolepsy occurs when a person faces excessive daytime sleepiness, but without facing the consequences of Cataplexy. In spite of taking a nap of around 3-8 hours, a person may wake fresh and energized. But within no time, they feel fatigued again and randomly doze off in whatever situation they may be.

Keep reading to know more about the symptoms that trigger both types of narcolepsy, thereby inducing an irrepressible desire to sleep.

There are half a dozen ways to diagnose which type of narcolepsy an individual suffering from. Some of these tests can be done to check for both types of this sleeping disorder. However, there are one or two tests specifically for type 2 Narcolepsy.

These tests are based on typical clinical symptoms:

A series of 5 tests are performed on the subject while they are asleep. Each test is separated at an interval of 2 hours and several sensors are attached to the patient’s body. If a sleep latency of fewer than 10 minutes along with a change in a sleep state to REM state occurs in the initial 8 minutes of falling asleep, then the subject is almost certain of a victim of type 2 narcolepsy.

This test occurs overnight in a hospital or sleep center. A bunch of electrodes is connected to the scalp (after putting gel for impedance resistance purposes), from which brain activity is measured in the form of brain waves. These waves are visible on the electroencephalogram (EEG) machine.

The amplitude and time between each full cycle decide whether the brain is denoting alpha, beta or gamma activity. By studying these specific signals, it is possible to understand the emotion the person is experiencing. Due to the presence of audio and video recording equipment, the doctor also records any snoring sounds, bodily movements, and jerks.

This analysis on a whole helps a doctor diagnose whether the patient is suffering from type 1 or type 2 narcolepsy.

This is a specialized test to detect a more severe type of narcolepsy – Type 1 Narcolepsy (combined with cataleptic attacks). The medical practitioner performs a surgery known as Lumbar Puncture (spinal tap).

Abscission is made between the bones of the spine near the brain and a liquid known as Cerebrospinal Fluid (CSF) is extracted. When taken to the lab for microscopic analysis and testing, the doctor checks for the amount of active hypocretin (orexin) levels present.

Hypocretin is the crucial hormone for inducing sleep and wake signals to other nerves which in turn spark activity of dopamine, norepinephrine, and serotonin. All this being interconnected, helps the doctor understand whether there is a deficiency of hypocretin or not.

When the brain is not producing enough energy and nerve signaling hormones, the body loses its muscle control and random emotions pop up, calling for a freak episode.

Treatment for Type 1 and Type 2 Narcolepsy

Various branches of medicines can be prescribed. This prescription is given based on the most commonly occurring symptoms of Narcolepsy.

Usually, medicines for type 2 narcolepsy range from cognitive stimulants, tricyclic antidepressants (TCAs) and Sodium Oxybate (although not approved by the FDA), also known as Xyrem.

Also Read: Benefits And Side Effects Of Armodafinil

Some specialized medicines that focus on reducing the frequency of cataleptic attacks and type 1 narcolepsy are serotonin and norepinephrine inhibitors known as:

Never fret about visiting a doctor for such issues. It is crucially vital to understand the exact kind of sleeping disorder that an individual is suffering from.

The doctor can prescribe medicines that also help get a grasp of random emotional outbursts, along with sleep paralysis and excessive daytime sleepiness. Especially the people diagnosed with type 1 narcolepsy – medical support is almost mandatory for such cases.