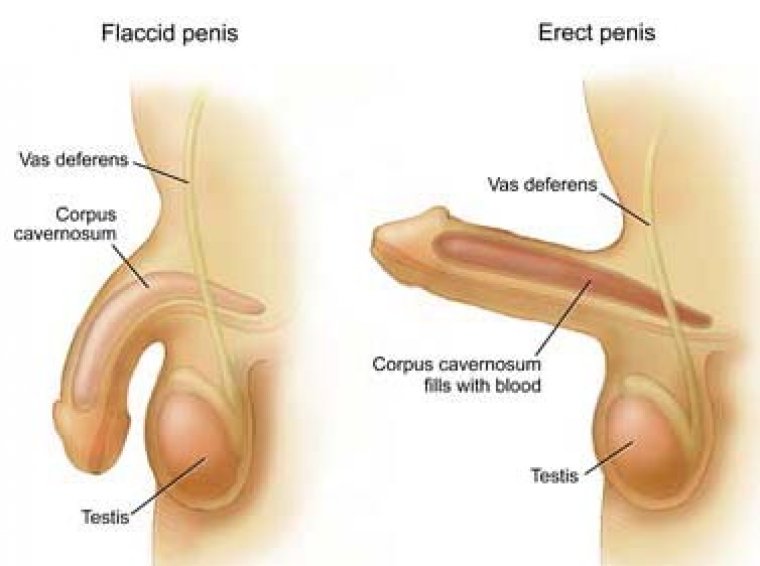 This article will primarily discuss the reasons for a flaccid and erect penis.

Despite being a major organ of about half the population, the penis is shrouded with a myriad of misconceptions regarding how it functions, especially the concept of erections.

Should my penis be longer or shorter? Why is it so hard? Should it be curved? Why does it get flaccid so soon during sexual interactions? These are just some of the questions we are going to try and answer here.

However, remember that every single person’s body is different, and this should only be treated as a guideline and not as an instruction book as to what to do with yourself.

Most importantly, if you are suffering from excessively weak or short-lived, unsatisfactory erections, then consider working on lifestyle changes. Shift to a healthier diet, reduce harmful consumption habits such as excessive alcohol consumption, excessive smoking, illegal drug consumption, etc.

Average Sizes And Behaviour Of The Penis

When a penis is flaccid, it isn’t erect or hard, it is soft and dangles loosely. This is the case for most of the time when a man isn’t aroused in any manner and is at rest. Studies have shown that the average adult penis length when flaccid is about 3.6 inches (little more than 9 cm), and the average girth is 3.66 inches.

However, when a penis is erect, it isn’t soft or loose, it is hard and tight. This happens either when a man is sexually aroused or in some special circumstances unique to individual people (such as nervousness or fear). In comparison to a flaccid penis, the average length of an erect penis is 5.1 inches, whereas its girth is 4 and a half inches. Also, an erect penis is most commonly a consequence of sexual stimulation, sexual interaction, or sexual excitement.

It is also reported that these sizes aren’t the same 100% of the time. They can slightly (very slightly) deviate based on the temperature, climate, mood, age, etc.

For example, cold weather can make a flaccid penis smaller for a brief period. It is an automated process that is done mainly by the body, all for protection purposes.

But How Does A Penis Get Erected In The First Place?

The penis is primarily composed of numerous muscles, just like any limb in our body. And all muscles need a steady supply of blood.

When a penis is flaccid, it is supplied with a partial flow of blood, enough to keep it healthy. However, during sexual arousal, the arteries supplying blood open up to allow a rush of blood. This sudden inflow of blood is too much for the veins to allow through at the same pace, although not harmful by any means.

Thus, the penis gets enlarged owing to the increased supply of blood and this leads to a maintained erection.
As scary as the compression of veins sounds here, it is completely normal, safe, and healthy. It is also a temporary condition, as when the brain stops receiving arousal messages and signals, the arteries go back to a normal, slower flow of blood. This allows the veins to slowly drain the accelerated blood flow and permits the penis to return to its normal, flaccid state.

What Happens When This Process Function As It Is Supposed To?

There are a variety of systems in play during what seems like such a simple process, but our body is complicated in ways more than you think. There are a plethora of problems that can potentially be involved when a penis is trying to become erect. The most common of such disorders is labelled as Erectile Dysfunction.

What is ED, How Does it Happen?

The number one most common issue is when the patient has a condition that affects the aforementioned blood vessels supplying blood to the penile tissues. As a result, the tissues don’t get inflated up with blood that causes the erection in the first place. It is also reported (in some cases) that recreational drugs, smoking, and alcohol consumption can cause/worsen the patient’s ED issue.

The following list summarizes many of the most common physical or organic causes of ED:

Is There Any Cure For ED?

The most common treatment for Erectile Dysfunction is a series of drugs known as PDE-5 (phosphodiesterase-5) inhibitors. These are available in a variety of options such as:

These are to be usually taken 30-so minutes before sexual activity (except some that are to be taken once a day). These are only given out on prescription and have a range of side effects, which most often are not too harmful, and may not even appear in most cases. But it’s wise to be aware of the same so that the ED victim doesn’t get paranoid and resort to additional unwarranted medication.

Here are few common side effects of PDE-5 inhibitors:

The penis is a highly complex and sensitive organ of the male anatomy, unlike most other organs. Due to its discussion being treated as taboo (along with any conversation regarding sex and genitalia), there’s a ton of misconception surrounding it.

We hope this piece has helped you in some capacity. Remember, you’re perfect just as you are, and you do not need to change yourself to fit any societal standard.

Similarly, an erect penis is considered absolutely normal when the smallest of moments of sexual stimulation occurs. But if your penis remains erect for hours even though not sexually excited, and if you have consumed any PDE-5 inhibitor leading to this prolonged erection, there is a high chance you’ve become a victim of priapism.

With this article, we have shed light on the reasons for a flaccid and erect penis. Further ahead, we have also discussed what is ED and the core causes for ED.