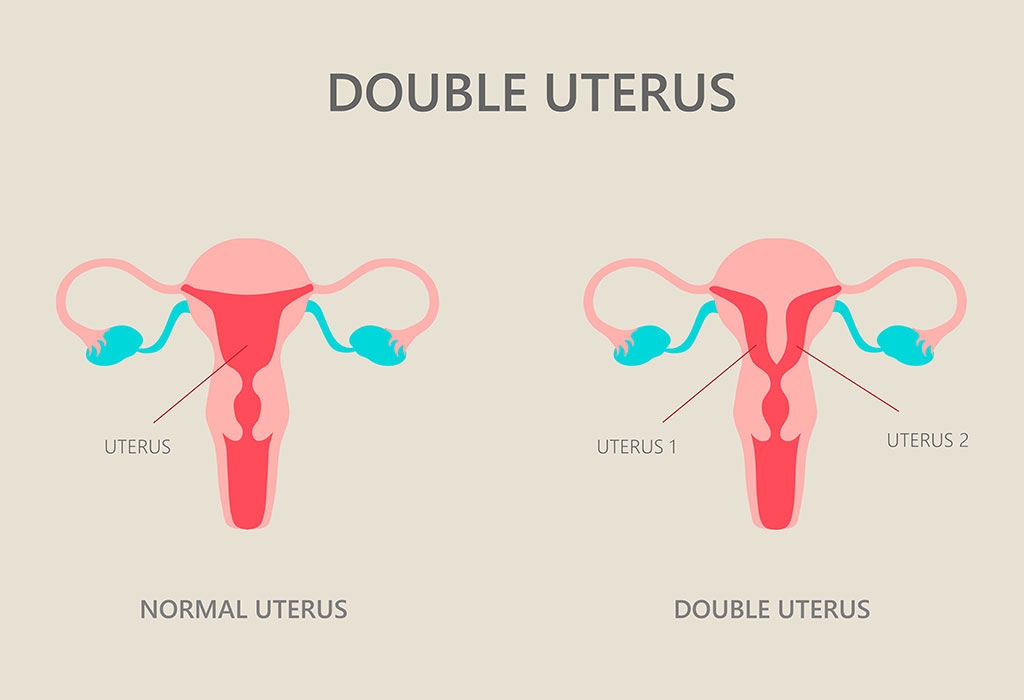 This article will explain the meaning, causes, symptoms and treatment of Double Uterus.

Double Uterus is an inherited condition in which a person sometimes has two cervices, two uteri, or two vaginas.

If you imagine the image of a uterus, you can recall two tubes connecting to one common opening, which is the normal uterus. Whereas in a double uterus, the tubes do not combine and remain separate.

Symptoms Of A Double Uterus

Most times, women do not know when they have a double uterus internally, but the common symptoms to diagnose it are as follows:

Miscarriage is caused due to the unusual shape of the uterus into which the embryo has implanted. This causes a threat to the baby’s life.

Women who have a double uterus have smaller uteri, which might contribute to preterm labour, which is another form of risk to the baby’s health.

There are cases in which women do not have any symptoms of a double uterus or any difficulties during pregnancy. These cases can only be identified through tests and examinations.

When a baby is between 6 and 22 months old, the sex organs mature, and the tubes fail to unite, resulting in a double uterus.

According to doctors, there is no known external cause for the formation of a Double Uterus yet. This condition is usually genetic, which means it is passed on from one generation to another in the same family. Likewise, women whose ancestors have had the condition are at risk of developing it as well.

First, a regular pelvic examination is conducted in order to identify irregularities in the uterus or vagina by the doctor. Next, various tests are conducted in order to get a deeper understanding of the condition and prepare a suitable treatment plan for the body based on the woman’s needs. The types of tests conducted are as follows:

This technique uses high-frequency sound waves to capture images of the organs. These images are sonograms which help in understanding the case even better. This can be done by pressing a wand against your abdomen or inserting a device into your vaginal canal.

This method also uses ultrasound frequency by inserting a fluid tube into the vagina to capture abnormalities internally. It helps us to understand the magnitude of the issue (if at all) and the nature of the organ.

Cross-sectional images of the body are created using magnetic fields and radio waves. This is another method that helps doctors understand the complications in an easier manner.

Images are produced when the woman’s body is passed through a large tube with powerful magnetic rays that examines the entire body.

A special dye is injected into your uterus through your cervix during this procedure. X-rays are taken to see the structure and size of your organs as the dye passes through them.

If a woman does not have any symptoms, the condition can be left untreated. If a woman faces symptoms like difficulties in giving birth, it is advisable to treat the condition by a surgery called Strassman Metroplasty, to remove the second opening.

The procedure entails joining the two channels together to produce a single uterus. If you have a second vagina and a second uterus, you may be a suitable candidate for a procedure that removes the tissue wall that separates the two vaginas. This will avoid miscarriages and preterm labour, and even better, ease the process of giving birth.

The first step to any treatment is to understand the choices available and gain a complete understanding of its methods and complications. Once you have chosen the method of treatment, produce a record tracking all menstruation dates and symptoms experienced during the period.

You should also produce a complete record of other medical conditions, medications and treatments undergone in the past. It is always advisable to take a family member or a friend with you in order to understand the treatment completely. Make sure to clarify all doubts and queries without hesitation. A proper understanding of the recovery process is also required in order to stay healthy in the future.

The Wolffian duct, which develops in the fetus, can be affected by abnormalities. Kidney problems can be caused by malformations of the Wolffian duct. This issue affects 15-30% of women who have a second uterus.

Your doctor would urge you to be cautious if you have a second uterus during pregnancy and will closely monitor your pregnancy to observe how your baby develops. If the baby is not functioning well, they may recommend an early caesarean section birth (C-section).

Strong menstrual discharge is common in women who have a second uterus. They may need medical assistance if the situation becomes uncontrolled, which can lead to infertility, where the woman cannot get pregnant in spite of trying continuously.

It is important to seek medical help in case you experience any of these symptoms in order to avoid complications in giving birth or in a regular course of life. Always visit a professional who has expertise in the female reproductive system, such as a Gynecologist, Obstetrician or Reproductive Endocrinologist.

Most women aren’t aware of the existence of such a condition due to no symptoms, which leaves it undiagnosed or untreated. Although, there is no risk to the woman’s life if it’s left undetected.