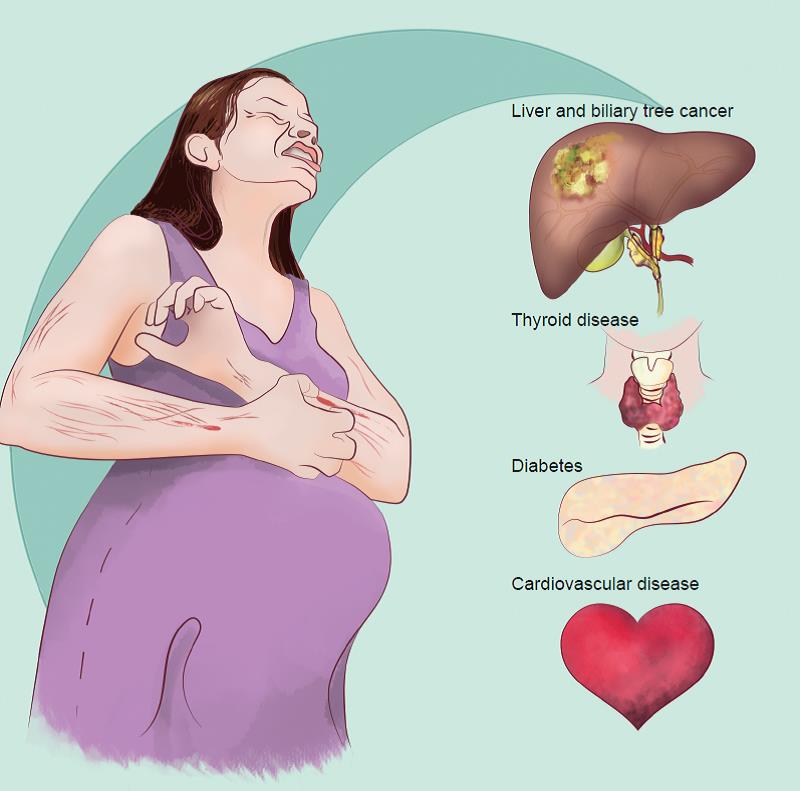 Some women experience intense itching late in their pregnancy phase. Cholestasis of pregnancy, a liver condition that exclusively develops during pregnancy, is the most prevalent cause.

Although cholestasis of pregnancy only lasts till the baby is delivered, it leaves a long-term impact on both, the baby as well as the mother. However, there are severe complications observed at the time of childbirth.

Cholestasis Of Pregnancy: What You Need To Know

It frequently shows up late in pregnancy in women who have a hereditary predisposition to it. It is the most frequent type of liver condition linked to pregnancy. Cholestasis of Pregnancy, on the other hand, usually disappears a few days after delivery.

Bile is a substance produced by the liver. During digestion, it aids in the breakdown of lipids (fats). Sadly, the flow of this bile is slowed or stopped as a result of pregnancy hormones. This is what affects liver function.

When the bile flow in the liver is interrupted or impeded, bile acids build up in the liver, and they can leak into the bloodstream.

Cholestasis during pregnancy is a condition that can be inherited through generations. The expectant mother might be at a higher risk of having Intrahepatic cholestasis if her mother or sibling had it during their pregnancy.

How Is Cholestasis Of Pregnancy Diagnosed?

A doctor can usually diagnose ICP with tests that show how well the patient’s liver is performing. This entails a physical examination as well as a few blood tests to determine the number of bile acids present in the blood.
ICP is confirmed when the bile acids or serum bile acids are identified at 10 micromole/L or above.

Although only 1 or 2 pregnant women out of 1000 are diagnosed with ICP, both, the expectant mother and the baby, may face complications during the pregnancy.

The following conditions put women at risk during pregnancy:

Even if the disorder clears up after the baby is delivered, it might have a long-term effect on the health of the mother and child.

The following are common complexities faced during Cholestasis of pregnancy:

Understanding The Complexities Of ICP:

In this situation, expectant moms are at risk of vitamin K deficiency throughout pregnancy. However, vitamin K insufficiency during pregnancy is extremely unusual in normal circumstances, yet it is quite dangerous.

Vitamin K deficiency raises the risk of serious internal bleeding, which can lead to difficulties during childbirth. Even worse, heavy internal bleeding can sometimes lead to the mother’s death and also stillbirth.

Women receiving ICP treatment are given vitamin K supplements and are monitored closely during their pregnancy to ensure that their vitamin K levels remain stable.

Aside from Vitamin K insufficiency, increased bile acid levels are another cause of stillbirth. This predicament, however, might be avoided by having the baby delivered early. Even though the risks are reduced, premature labour may have a greater impact on the baby’s health.

The risk of infection increases when a baby’s organs are underdeveloped owing to preterm labour. If the baby’s lungs become infected, he or she may require long-term respiratory support.

Another reason behind the child’s breathing problem could be a Meconium leak in the fluids surrounding the baby during pregnancy, at the time of birth.

Meconium is the baby’s very first faeces. If the newborn inhales this hazardous waste shortly before delivery, it may cause long-term respiratory problems.

Below are mentioned few of the most commonly observed symptoms of Cholestasis during pregnancy:

These are few rarely observed symptoms:

Severe itching, particularly at night, is a significant symptom of ICP. The treatment of ICP aims to alleviate severe itching in these women. And in terms of a solution for this, anti-itch medication is prescribed to relieve the itching.
Ursodeoxycholic Acid is another extensively used medication that significantly reduces the concentration of bile acids in the bloodstream.

It’s also important to remember that your doctor may decide to deliver the baby sooner than expected. This is to avoid any additional complications with the infant. Keep in mind, preterm delivery comes with its own set of risks, but it is the safest alternative for avoiding stillbirth and other serious issues.

With the eventuality of preterm labour, the mother will be given steroids to aid in the development of the baby’s lungs. As a result, there will be a lower possibility of the infection spreading to the lungs.

Bonus Tip: Women are advised to eat foods that will not put further strain on their liver. Additionally, they are advised to avoid using any other type of pain medication unless their doctors have prescribed it.

ICP is a common liver condition that occurs during pregnancy. It’s either hereditary or induced by a build-up of bile acids in the bloodstream.

ICP, on the other hand, causes numerous difficulties both, throughout pregnancy and during childbirth. These complications could be avoided with adequate medicine and health disorder management.

Severe itching, dark urine, nausea, abdominal aches, and a variety of other symptoms can all be detected as a sign of ICP. These symptoms are frequently discovered in the first few weeks of the third trimester.

Women with Cholestasis ought to have routine appointments, follow all precautionary measures to avoid additional complications during pregnancy, and ensure the safe delivery of the baby.